Experienced in the following areas:

Siobhan Grey KC specialises in murder cases and serious crime and has extensive experience in examining and cross-examining expert witnesses such as Pathologists and Psychiatrists in Murder cases. Siobhan Grey is often called upon to speak at conferences about expert evidence and her recent events have involved neuroscience and the law; pathology and the crime scene; psychiatry and homicide.

Siobhan Grey is a member of The British Academy of Forensic Sciences.

Her murder cases are conducted both nationally as well as internationally. She has argued cases before the European Court of Human Rights in relation to the admissibility of hearsay evidence under the Criminal Justice Act 2003 in a gang-land murder case and is currently engaged in appellate work in St Kitts and the Turks and Caicos Islands in relation to homicide cases.

R v Pachecka: Central Criminal Court, Old Bailey (November 2021) An 8 week re-trial for Murder after the conviction was overturned in the Court of Appeal. The case involved complex medical evidence regarding PATHOLOGY with multiple experts to examine. Four pathologists gave evidence as well as multiple scientific forensic experts which undermined the whole JOINT ENTERPRISE argument advanced by the prosecution. The case has been the subject of an international documentary made by investigative journalists based in Poland.

R v Thompson: Newport CC (March 2021) A 10 week trial. The Defendant, along with others, was charged with the murder of a 17 year old boy. The case concerned a drugs turf war. The case concerned important principles about withdrawing from a JOINT ENTERPRISE.

R v Pachecka and Others Court of Appeal (December 2020) Siobhan Grey KC led the legal arguments in the Court of Appeal, Criminal Division. The appeal involved investigative journalists based in Warsaw who unearthed fresh evidence.

R v Lall. Inner London Crown Court. (November 2020) The Defendant was charged with murder. The case involved complex PSYCHIATRIC evidence concerning paranoid schizophrenia, non-compliance with medication and impairment of self-control in the context of mental illness. The Defendant was given a Hospital Order. The Prosecution sought to appeal the Hospital Order by way of an Attorney General’s Reference on the grounds that the sentence was too lenient. The Defence was successful in resisting the AG’s Reference and the Hospital Order was upheld.

R v H: Cardiff Crown Court. (June 2019). A 6-week trial. Represented a boy aged 17 who suffered with a severe stammer and had been diagnosed with ADHD and a Depressive Disorder. He was charged with murder and the trial involved five co-accused in relation to the torture and stabbing of a young man.

R v P: Central Criminal Court, Old Bailey. (November 2018). Represented a man charged with the murder of his employer at her home address. The issues focused on the nature of the Defendant’s medication and its impact on his brain. This case involved extensive investigations into pharmacology and heptology.

R v O: Swansea Crown Court. (October 2018). Represented a woman charged with murdering a pensioner in his own home. The case involved three Defendants and focused on the unreliability of non-statistical DNA evidence.

R v H: Inner London Crown Court. (May 2018). The Defendant was charged with Manslaughter having sold slimming tablets over the internet resulting in death of a vulnerable young woman.

R v F: Sheffield Crown Court. (October 2017) A 4-week trial. Represented a man charged with the torture and murder of a drug user. The case involved three Defendants and focused on the unreliability of mobile phone and social media evidence in a case where the Defendant was running alibi.

Siobhan has a long history of defending in serious sexual offences involving historic sexual abuse; violent sexual assaults committed during the course of a homicide as well as internet sexual offending which engages multi-jurisdictional issues. Siobhan has completed the vulnerable witness training courses and is experienced at cross examining young and vulnerable witnesses. Furthermore, she understands the importance of disclosure issues in particular third-party disclosure in such cases and is always live to the question of s.41 of the Youth and Criminal Evidence Act 1999 as regards the admissibility of a complainant’s prior sexual history.

R v N: Maidstone Crown Court (March 2022) The case involved historic allegations of rape and sexual assault. The case involved incisive cross examination of the complainant with detailed disclosure of third-party material from outside the jurisdiction.

R v W: Portsmouth Crown Court (January 2022) The case involved historic allegations of sexual assault and the Crown asserted that one allegation was caught on the camera of a mobile phone.

R v W: Croydon Crown Court. (May 2019) Represented a man charged with 18 counts of sexual assault alleged to have been committed over skype. There was extensive legal argument on the admissibility of hearsay evidence, including anonymous hearsay, found on the Defendant’s telephone and computer.

R v G: Guildford Crown Court (August 2018) Represented a man on multiple historic allegations of child cruelty dating back to the 1980s and 1990s. The case involved extensive disclosure issues as regards third party material in relation to all complainants.

R v HB: Guildford Crown Court (February 2018) Represented a man charged with stalking who applied a tracker to his ex-wife’s car. The issue turned on the construction of the words in the Protection from Harassment Act 1997.

R v P. Croydon Magistrates’ Court. (October 2017) Represented a man charged with rape and sexual assault. The case focused on seeking and obtaining disclosure of the defendant’s telephone which highlighted the extensive messages sent to the Defendant by the complainant.

R v R: Oxford Crown Court (September 2016) Represented a deaf man with learning difficulties charged with rape. The case involved numerous intermediaries during the trial process and a careful understanding of how to present the Defendant’s evidence in chief before the jury in line with the Advocates’ tool kit for vulnerable witnesses.

Siobhan has a long history of defending in fraud related offences including investment frauds, and MTIC frauds. She has defended in SFO prosecutions including a pension fraud worth over £50 million which was the biggest pension fraud since the Maxwell trial in the 1990s; a conspiracy to defraud involving £80 million whereby detector devices, ‘the Alpha 6’ were sold to Government and law enforcement agencies world-wide to detect explosives, drugs and weapons. She has defended company directors prosecuted under the Export Control Act 2002 for the alleged violation of UK export control regulations in relation to conventional arms and ammunition as well as dual use goods to Southeast Asia. Siobhan has spoken at National events on Export Control and Dual Use items, which included the former head of the Secretariat for the Wassenaar Arrangement on export control of arms and ammunition.

In the context of Business crime, Siobhan Grey has detailed experience of dealing with Confiscation/POCA related matters and an extensive knowledge of the case-law in this area. The legal landscape has dramatically changed in relation to such proceedings over the years with the recognition and statutory prohibition involving a disproportionate interference with a convicted person’s property rights. Cases include R v Pitcher, Southwalk Crown Court and arguments involving £52 million benefit figure as well as confiscation proceedings in the context of an Insider Dealing case R v Sanders, Southwark Crown Court.

R v P: Cardiff Crown Court. Acted for an Accountant charged with Defrauding the European Union and the Welsh Government of £5.19m in grants.

R v M: Southampton Crown Court. Acted for an Accountant on an indictment involving eight defendants charged with Conspiracy to Defraud by using the Construction Industry Scheme to defraud HMRC of over £1million of tax owed by subcontractors in demolition projects.

R v P: Central Criminal Court: Represented a company director on 22 counts of Fraud and exporting dual purpose goods (commercial and military items) to China without a licence. The case involved novel and complex legal argument concerning the EC Regulation 428/2009 in relation to Export Control and whether it lacked legal certainty in the context of the classification of Microwave Monolithic Integrated Circuits. Three expert witnesses in the fields of electrical engineering and export control were engaged in the case.

R v A: Bolton Crown Court: Defended one of two defendants charged on an indictment with 27 counts of Fraud and Money Laundering involving millions of pounds regarding property in the Cayman Islands.

R v S: Manchester Crown Court. Defended the wife of the principal defendant in a £200 million money laundering regarding a licensed money service business specialising in remitting money to Pakistan.

Siobhan was instructed to defend in the News of the World’s Fake Sheikh ‘Red Mercury’ plot. The Prosecution alleged a plot to buy radioactive material. The Defendant was acquitted after a three-month trial at the Old Bailey concerning a conspiracy to fund terrorism and a conspiracy to possess an article for terrorist purposes.

"Siobhan is open-minded, methodical, meticulous and scientific in her approach to forensic evidence."—Legal 500, 2023
"Very hard-working and persuasive. She is technically gifted and calm under pressure."—Chambers and Partners, 2023
"She fights for her client and goes that extra mile."—Chambers and Partners, 2022
"A passionate, smooth advocate who has great communication skills."
"Very, very good and not afraid to ruffle feathers in court – she fought tooth and nail for the client but was very charming with it. I was very impressed with her commitment, which was extraordinary. "
"Takes every proper point and fight the whole way."
"An unbeatable combination of great intelligence, great insight and really hard work."
"A polished advocate."
"A highly dedicated and meticulous silk. Very hard working and has a detailed understanding of her cases both legally and factually. Good analytical approach to her cases and impressive legal knowledge. Good advocate and first-rate written submissions. Very easy to work with from the point of view of solicitors and junior counsel. Excellent manner with clients." 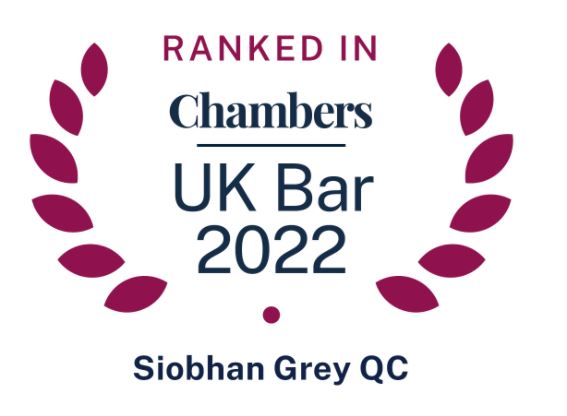 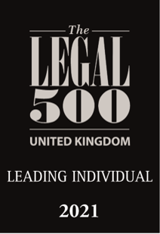 Presented a zoom seminar on Diminished Responsibility in Homicide cases. May 2020.

Presented a seminar on Expert witnesses in Homicide cases – a look at Pathology, DNA, Blood Spatter and Neuro-Psychiatry. July 2019.

Presented a seminar on Disclosure in the Criminal Courts, Gray’s Inn, Oct. 2017.

Presented a seminar on the Export Control Act 2002 and the export of Dual Use Goods, July 2017.

Chaired a seminar on Freedom of Expression and the Internet and criminal offences Florence University, July 2013.

Devised and presented a Symposium at the European Parliament’s Grand Chamber on the Impact of the Internet and Social Media Platforms. Brussels, June 2012.

Instruct SiobhanTo instruct Siobhan please contact our clerks by phone on +44 (0) 20 7036 0200 or email us at clerks@libertaschambers.com
CONNECT WITH US FOR THE LATEST NEWS & UPDATES
TwitterLinkedInLibertas Lens