The Aims of Sentencing – Preventing Re-Offending? By Marie Spenwyn

The Aims of Sentencing – Preventing Re-Offending?

This article reviews the recent research report published by the Sentencing Council examining the effectiveness of sentencing with a view to approaches to mitigation. The report concluded that the evidence does not support a conclusion that more severe sentences have a significant deterrent effect on the offender or on offending behaviour generally.

Measuring the effectiveness of sentencing is a key part of the role of the Sentencing Council. On the 30th September 2022 a report was published authored by Dr Jay Gormley and Dr Ian Belton entitled “The Effectiveness of Sentencing Options on Reoffending”. The following appears in the key findings section of the report:

The evidence does not suggest that using more severe sentences (particularly sentences of immediate imprisonment over other disposals) has significant deterrent effects on the person sentenced or the general population. However, more evidence is needed to assess the deterrent effects of suspended custodial sentences, rather than immediate imprisonment, on those subject to such an order.

The report also finds that the evidence demonstrates – in fact ‘strongly suggests’ – that sentences of immediate custody under twelve months are less effective than other types of sentence when focusing on preventing reoffending. The authors state in that context that there is a ‘reasonable body’ of evidence which indicates that use of short sentences can in fact increase reoffending. An understanding of these findings may assist those presenting submissions as to sentence in certain cases.

The use of sentencing guidelines when mitigating in circumstances where it is clear what category a case will fall into, either by agreement or by direction from the bench during submissions, can often place a case into the significant bracket where – once an appropriate reduction for plea and for mitigation are taken into account – the question of whether a sentence can properly be suspended is a key consideration for the court. Reference to the guideline on use of suspended sentences and the significant authority of Petherick [2012] EWCA Crim 2214 assists those mitigating in making targeted submissions to seek to persuade the court to an option that does not involve immediate custody. Considering the import of aspects of this report in a measured way, focused as it is on the effectiveness of sentences, could well assist those tasked with inviting the court to avoid a prison sentence.

Further, depending on the facts of the case and the circumstances of the offender, the advocate may also draw assistance from some of the specifics within the report – for example when representing females (see part 7). For children, the focus on age and brain maturity (see part 3) are areas that could be drawn together with the overarching principles when sentencing young offenders to highlight pertinent features.

The aims of sentencing are enshrined in section 57 of the Sentencing Code for adults (offender aged 18 or over when convicted). Entitled “purposes of sentencing”, s57(2) states that, save in relation to disposals under the Mental Health Act 1983 or mandatory sentences, the court must have regard to:

(a) the punishment of offenders,
(b) the reduction of crime (including its reduction by deterrence),
(c) the reform and rehabilitation of offenders,
(d) the protection of the public, and
(e) the making of reparation by offenders to persons affected by their offences

It is striking that the research does not find support on the current evidence that sentences of immediate custody – as opposed to other alternative disposals, specifically suspended sentence orders or in the case of children intensive rehabilitation orders – have a deterrent effect on the person being sentenced or the ‘general population’. When mitigating in a situation where there is a genuine question for the court as to whether imposing immediate custody in the form of imprisonment, detention in a young offender’s institution or, for those under 18, a detention and training order, an awareness of these findings could be usefully woven into submissions. In combination with a thoughtful pre-sentence report setting out a programme for sentence specifically targeting the prevention further offending acknowledging these findings might assist in what can often be a delicate balancing exercise for the court. 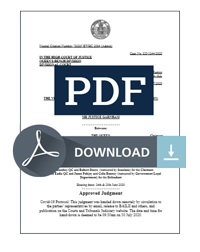 Related Articles
The Best Way to Develop the Current Law on Complicity, AKA “Joint Enterprise” The Best Way to Develop the Current Law on Complicity, AKA “Joint Enterprise” LIBERTAS CHAMBERS ONLINE LECTURE 23 February 2023 at 6pm. THE BEST WAY TO DEVELOP THE LAW ON COMPLICITY AKA “JOINT ENTERPRISE” As concerns rise about the incarceration of accessories to murder for increasingly long periods of time, this webinar  will consider the current substantive law of complicity, and where it could be improved. The focus is on the physical components of the crime and will suggest there are the tools available in the law already to improve the law, particularly picking out the need for a substantial contribution by the accomplice, and a sufficiently high level of fault. Presented by our Dr Felicity Gerry KC and Professor Matthew Dyson (Corpus Christi College, Oxford): Felicity is well known for leading in the UK Supreme Court in R v Jogee and for defending cases involving issues of complicity in homicide, terrorism and international crimes.  Matthew was a defence expert in R v Jogee. He made a leading contribution to the correction of the error of law and is widely published in the field. This webinar presents his recent research into how to regulate liability in complicity with greater legitimacy. Register today – https://www.eventbrite.co.uk/e/the-best-way-to-develop-the-law-on-complicity-aka-joint-enterprise-tickets-473220534357 To ensure you don’t miss out on future events please register for our newsletter by clicking here.
Libertas Chambers
Libertas Lens – Issue 4 – 2022 Welcome to the fourth and final edition of The Libertas Lens for the year. In this newsletter, we introduce a new member, provide an update on our recent rankings in the Chambers and Partners and Legal 500 guides, include 4 expert insight articles, update you on the latest news and case updates, and provide links to a upcoming webinar from our expert team and special guest speakers. To view the edition click here To register for Libertas Lens and ensure you never miss out on our news, events and free webinars follow this link or click Join our Newsletter in the footer below.
Libertas Chambers
Kalinowski murder case – live broadcast of sentencing Leonard Smith KC and Marie Spenwyn instructed by Rahman Ravelli Solicitors appeared for the mother in the murder case concerning the death of Sebastian Kalinowski heard at Leeds Crown Court earlier this year before Mrs Justice Lambert.   The sentencing hearing which took place today was broadcast following recent changes allowing TV cameras into Courts. The case was deemed to be exceptionally serious and a minimum term of 39 years was imposed.   Sky News recording: https://www.youtube.com/watch?v=6hYzO-u2XoQ Link to Judgment: https://www.judiciary.uk/judgments/r-v-latoszewski-kalinowska/ Links to news items: https://www.bbc.co.uk/news/uk-england-leeds-63489229 https://www.bbc.co.uk/news/uk-england-leeds-62009952
Libertas Chambers
Author
Libertas Chambers
Contributors
Marie Spenwyn
CONNECT WITH US FOR THE LATEST NEWS & UPDATES
TwitterLinkedInLibertas Lens

𝗣𝗿𝗲𝘀𝗲𝗻𝘁𝗲𝗱 𝗯𝘆 𝗼𝘂𝗿 𝗺𝗲𝗺𝗯𝗲𝗿 𝗗𝗿 𝗙𝗲𝗹𝗶𝗰𝗶𝘁𝘆 𝗚𝗲𝗿𝗿𝘆 𝗤𝗖. This webinar explores penal policy and prisoner potential. We discuss legal services as a lifeline and the impact coaching can have for those who find themselves ‘behind bars’.

We are delighted to announce that we have committed to host interns as part of the Bar’s collective participation in the #10000BlackInterns scheme More information can be found at 10000blackinterns.com #libertaschambers pic.twitter.com/GPIPX0YhRJ

𝗣𝗿𝗲𝘀𝗲𝗻𝘁𝗲𝗱 𝗯𝘆 𝗼𝘂𝗿 𝗺𝗲𝗺𝗯𝗲𝗿 𝗗𝗿 𝗙𝗲𝗹𝗶𝗰𝗶𝘁𝘆 𝗚𝗲𝗿𝗿𝘆 𝗤𝗖. This webinar explores penal policy and prisoner potential. We discuss legal services as a lifeline and the impact coaching can have for those who find themselves ‘behind bars’.