Sign up open for our next Libertas Webinar – details below

Siobhan Grey QC will be joined by Professor Michael Kopelman, Neuropsychiatrist and Professor Chris Brewin, Clinical Psychologist to discuss the accuracy of memory in the courtroom, memory disorders and how neuro-imaging – CT scans and MRI scans – is being relied upon at trial.

This talk will give a brief introduction to some of the ways in which clinical neuroscience is implicated in the criminal courts, with particular reference to memory disorders and incorporating issues such as amnesia for offences, automatism, alcohol-related memory disorder, and fitness to plead. It will give a basic account of how such cases are assessed, including neuro-imaging, and the problems which can arise.

Siobhan Grey QC, is a criminal defence advocate who has led in many murder cases where the central issues involved memory disorders and has relied upon neuroimaging to show a deterioration in the brain. Ms Grey QC has recently succeeded in having a murder conviction quashed in the Court of Appeal on the grounds of fresh evidence and she is currently instructed in appellate cases before the Eastern Caribbean Supreme Court of Appeal and the Privy Council. She is also instructed to lead for the Defence in forthcoming murder cases.

Professor Michael Kopelman is Emeritus Professor of Neuropsychiatry, Kings College, London. He ran a Neuropsychiatry and Memory Disorders Clinic for 25 years at St Thomas’s Hospital, London. He was President of the British Academy of Forensic Sciences. He has written on many aspects of amnesia and memory disorders – from the nature of cognitive deficits in neurological disease to amnesia in crime. His medico-legal work has included a variety of criminal, extradition, death row, civil and Court of Appeal cases.

Professor Chris Brewin is Emeritus Professor of Clinical Psychology at the Research Department of Clinical, Educational and Health Psychology, University College London. In 2013 he received the Robert S. Laufer Memorial Award for Outstanding Scientific Achievement from the International Society for Traumatic Stress Studies. He is acknowledged as a leading expert in trauma and memory and his medicolegal work has focused on memory for historic sexual abuse. 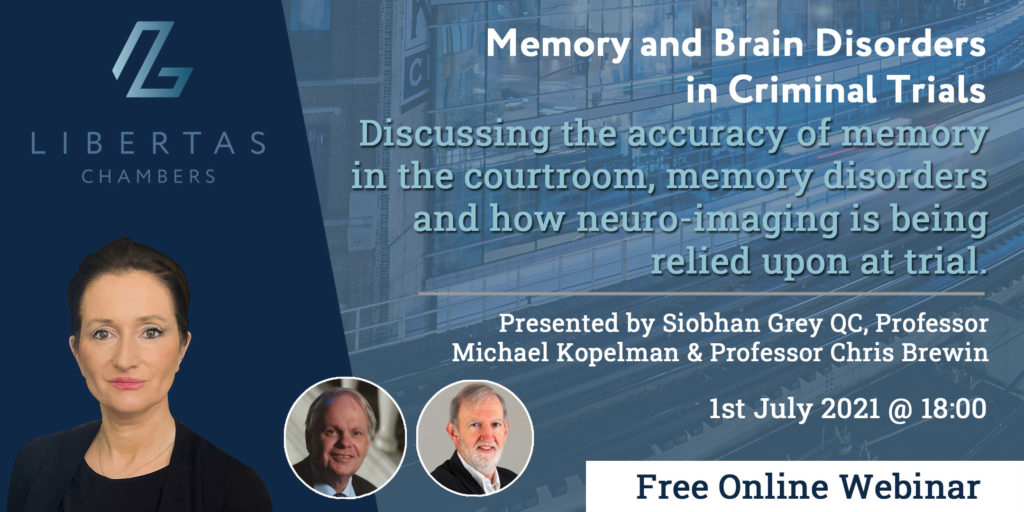 Related Articles
Felicity Gerry QC – BBC Newsnight – Virginia Giffre v Prince Andrew Felicity Gerry QC has given expert interviews on the Virginia Giffre v Prince Andrew litigation this week on BBC Newsnight, Sky News, and on various BBC Breakfast shows. She was asked about Judge Kaplan’s ruling on the motion to dismiss and the next steps in the process. Broadly speaking she said the following: This was a ruling on a motion to dismiss which is an early method of stopping the case. The judge is bound by law to assume the allegations are correct and to consider whether (a) they are not too vague to proceed and (b) the agreement with Epstein on one interpretation is not binding. These issues were decided (a) as not vague enough to be thrown out early but that does not decide whether they will be successful at trial and (b) the application of the agreement can be interpreted as not binding but that will have to be decided at trial too. There will now be a timetable to trial which will include dates for discovery on both sides – VG will be asked for clarity and PA will be asked for details. This is a normal legal process and judges are often asked to decide if each party has complied so expect further hearings along the way. There are more legal arguments likely on jurisdiction (whether VG has sufficient connection with the US for the law to apply) and limitation (whether the time limit to bring a claim is validly extended). These are NOT technicalities but how the law works to be fair to all parties to litigation. On the BBC interview with Prince Andrew she said that often an interview given in relation to allegations will be admissible at trial. Clients often do not interview well but that does not necessarily mean they have done what is alleged. That will be decided on all the evidence. View the BBC iPlayer video here or by clicking the image below. The Prince Andrew story begins at 24 minutes and our very own Felicity Gerry QC appears from 27 minutes onwards. https://www.bbc.co.uk/iplayer/ Prince Andrew to face civil sex case – https://news.sky.com/ Virginia Giuffre ‘on campaign to expose evils of sexual abuse’, says lawyer: https://news.sky.com/
Libertas Chambers
Not Guilty Verdicts In Armed Robbery Case Directed not guilty verdicts were returned for Sarah Day’s client, during his trial for armed robbery and possession of an imitation firearm with intent to cause fear of violence at Harrow Crown Court. Sarah was instructed by David Holmes at Dalton Holmes Gray.
Libertas Chambers
Empty Nexus: ‘Joint Enterprise & Causation’ – Register Today Sign up open for our next Libertas Webinar – details below Discussing the concept of causation in criminal cases where ‘nexus’ and ‘ample evidence’ mask serious questions around causation and connectivity to a crime.  Felicity Gerry QC and Associate Professor Beatrice Krebs consider how, post R v Jogee [2016] UKSC 8 ‘inferences’ may go too far in a murder trial and how we can rescue fundamental principles from prosecutorial over reach. This lecture examines the latest decisions and recent trials in the area of complicity and the current trajectory of the senior courts. Presented by Professor Felicity Gerry QC & Associate Professor Beatrice Krebs Felicity has appeared in complicity cases in several jurisdictions, including the UK, Hong Kong and Australia and has spoken widely around injustices in this field. In 2016 she led for the Appellant in R v Jogee [2016] UKSC 8, when the UK Supreme Court corrected an error of law in complicity. Beatrice was a key expert assisting on the Jogee appeal and has since published her edited collection: Accessorial Liability After Jogee. Register today – https://www.eventbrite.co.uk/e/211761663837/ To ensure you don’t miss out on future events please register for our newsletter by clicking here.
Libertas Chambers
Author
Libertas Chambers
Contributors
Siobhan Grey
CONNECT WITH US FOR THE LATEST NEWS & UPDATES
TwitterLinkedInLibertas Lens

A reminder that you can sign up for our next webinar on the use of rap lyrics in criminal trials with @felicitygerry and Dr Owusu-Bempah. Don’t miss out! 27/01/22 @6pm Register here: eventbrite.co.uk/e/the-use-of…

Our first webinar of the year is now open for sign up! Join @felicitygerry and Dr Owusu-Bempah on 27 January 2022 at 6pm, as they discuss the use of rap lyrics in criminal trials. Sign up here: mailchi.mp/libertaschambe…

The latest edition of the Libertas Lens is out today, please follow the link below for access: mailchi.mp/libertaschambe…

RT @felicitygerry Hers our ⁦@LibertasChambe3⁩ article on Criminal Justice Responses To Maternal Filicide and why the CPS should change its policy ⁦⁦@DrEmmaMilne⁩ libertaschambers.com/media-hu…